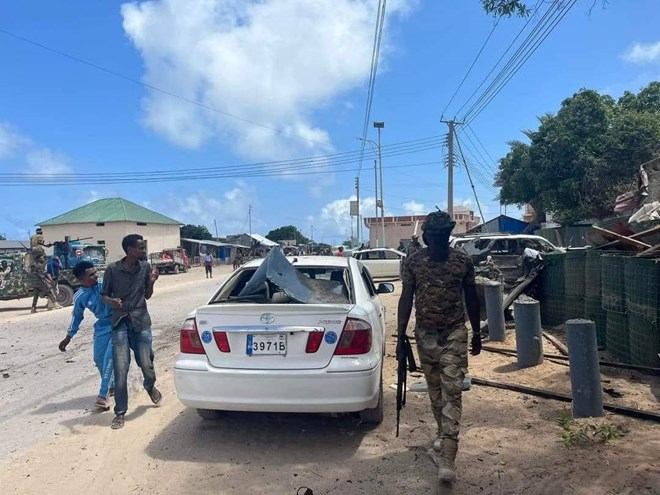 Kismayo (Haldoor News) – Al Shabab militants stormed Tawakal hotel in Kismayo on Sunday, according to residents and state media.
An eyewitness told Hiiraan Online that the attack started with a car bomb explosion followed by gunfire.

The al-Qaeda-affiliated militant group al-Shabab claimed responsibility for the ongoing attack.
The militants were said to have raided the hotel, where a heavy exchange of gunfire had been reported.

Jubbaland regional state officials and entrepreneurs frequently use the Tawakal hotel as a meeting place.
The number of casualties is not yet known.
Over the past two months, Al Shabab has lost significant ground to the government and local militia forces as the joint forces intensified their offensive against the militants.
International partners such as Turkey and the US have provided drones and airstrikes.
Somali government officials confirmed hundreds of militants were killed in the latest operations and recaptured over 60 villages from the militants.

On Saturday, Somali military forces backed by local militia forces recaptured the strategic villages of Masjid Ali Gadud and Burdacar in the Middle Shabelle region after the militants completed their withdrawal from the towns on Saturday.