Know three things about the port of Garacad, which President Hassan Sheikh cut off the rope. 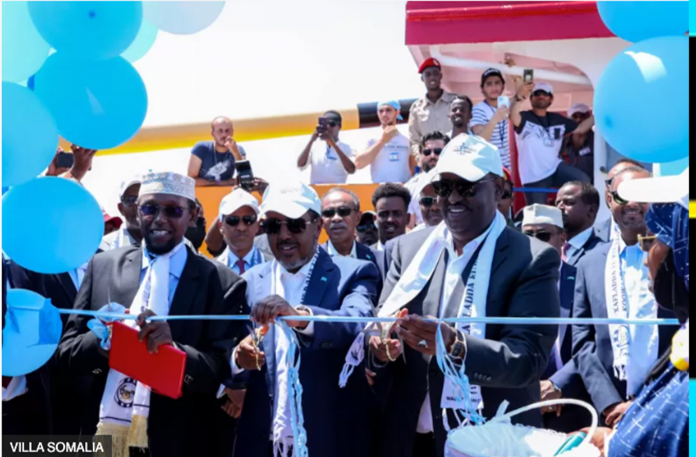 Mudug-Garacad Sunday 23-10-2022 (Haldoornews:- The arrest was made at the port of Garada, in Mudug region where there were officials, businessmen and many other people who witnessed the launch of this project which is described as the biggest recently implemented in the Puntland regional government.

The President of Somalia, Hassan Sheikh Mohamud, and the President of Puntland, Said Abdullahi Deni, officially cut the cordon at the port of Garacad.

Officials from the region are participating in the ceremony, including the president of the Somali Regional Government, Mustafe Muhumed Omar and the designated minister of defense in Kenya, Aden Barre Duale.

Now know five things about the port of Garakad.

The first phase of Garakad port

The Garacad port project was launched in 2019, although the process and organization has been going on for more than that, it has gone through different stages.

Today’s unveiling is the first phase of the construction and it consists of two jambs (two sides), there are two more sides left, and the plan is to finish them, according to the officials of the project in charge of the Wadaagsan company. . 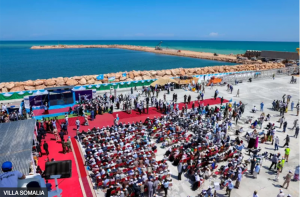 The opening of the port took place with the first ship loading about 9000 tons of concrete.

Businessmen who receive help from various sectors of society and the Puntland administration, have implemented this port whose construction has cost 120 million dollars. When the project is completed, the total cost is expected to be 325 million dollars.

Construction of the port of Garada

“The idea was originally owned by businessmen, but the Puntland government and the people also participated in the construction,” said the manager of the Wadaagsan company that built the port, Saeed Abdulqadir Fadi.

The President of Somalia, Hassan Sheikh Mohamud, who delivered a speech at the ceremony, praised the people of Puntland and the Somali people in general for the cooperation that led to the achievements they made.

“Any progress is based on peace and unity. The community of this area and Puntland in general have shown courage, hard work and how the Somali people can achieve great success if they join hands. The success of this project belongs to all Somalis,” said President Hassan Sheikh.

The importance of Garada port

In addition to the opening of the port, the officials who attended were also present with business companies owned by Somali people, some of whom are said to be starting soon to unload the goods they bring from abroad.

There will also be the construction of a road that starts from Garacad, passes through Galkayo and reaches the area on the border between Somalia and Ethiopia, named Tuur Dibi in Goldogob district.

The port will also be used as a hub for livestock exports as it is located in an important area between the ports of Mogadishu and Bosaso which are very far apart.

Also, the central regions are the places where most of the animals are exported from Somalia and this port is an important opportunity.

The manager of the shared company, Saeed Abdulkadir Fadi, told the BBC that there will also be a dry port where most of the Ethiopian government will import goods.

The president of the Somali regional government, Mustafa Muhamed Omar, who addressed the ceremony, also said that since the change in Ethiopia, Prime Minister Abiy Ahmed took office, the business of Bosaso port has increased, due to the use of the Ethiopian government.

President Mustafa said: “We are strengthening this and we are happy with the new port that has developed.”

The President of Puntland Saeed Abdullahi Deni, for his part, said that he is happy that Somalia is heading in the positive direction of development, pointing out that Somalia is at the center of the development of the Horn of Africa.

The importance of this port is that local people can also find opportunities for work and investment in the area.