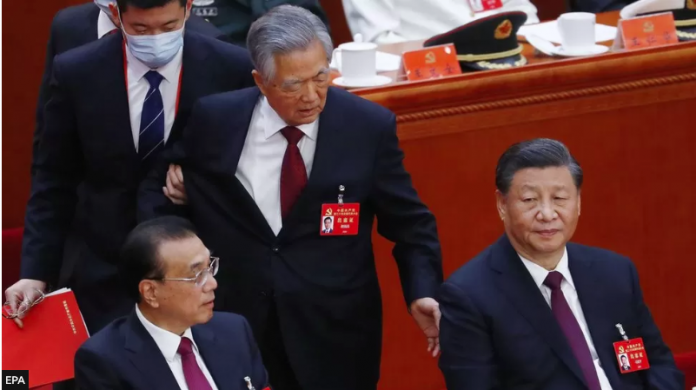 Footage of China’s former leader, Hu Jintao, being asked to leave the stage at the Great Hall of the People in Beijing during the Communist Party Congress is drawing global attention as people try to work out what has just happened.

There are a lot of questions and no answers so far from the Chinese government.

Mr Hu, 79, appeared reluctant to move. If that is the case, why?

What did he say to the man who replaced him, Xi Jinping, which prompted a nod from China’s current leader? And what did he say to his protégé, Li Keqiang, as he tapped him on the shoulder before being ushered off stage?

Watch: Former leader of China, Hu Jintao, is led out by officials at the Communist Party Congress

The two most likely reasons for his departure are that it was either part of China’s power politics on full display, with a leader representing a former time being symbolically removed, or that Hu Jintao has serious health problems.

It came at the end of the Communist Party’s week-long congress, which cemented Mr Xi’s position as China’s most powerful leader since Mao Zedong.

On the first day of the congress, Mr Hu was only able to walk in with the assistance of an official. On that day, he looked pretty frail.

However, if he was led away at the end because of ill-health, why did this happen so suddenly? Why in front of the cameras? Was it an emergency?

A longer edit of the footage taken on Saturday shows Xi Jinping turning to the former party chairman and also, to Mr Hu’s left, senior figures Li Zhanshu and Wang Huning appearing concerned. Mr Li even moved to help him at one point, but was pulled back by Mr Wang, as if to say, “Don’t get involved in this.”

After Hu Jintao stood up, he also reached out to take Mr Xi’s notes by mistake. At this stage, he appeared confused. China’s leader moved Mr Hu’s hand away and took the notes back.

The Communist Party’s mass meetings are normally highly scripted events, leading to speculation that the timing of Hu Jintao’s departure might not have been an accident.

He attended the earlier closed-door session on the last day of the Congress, then cameras were allowed in for the final portion of the day. It was just after the cameras had set up that officials approached Mr Hu and indicated that he should go.

That said, the party doesn’t normally air its dirty laundry in public. If this was a deliberate show, it would mark a departure from usual behaviour.

What is pushing this along is that Hu Jintao represents a very different model for China from that of Xi Jinping.

He ran a much more collective leadership and had to balance various factions represented on the Politburo Standing Committee.

The Hu years – he held the presidency between 2003 and 2013 – were seen as a time of opening up to the outside world and increased tolerance of new ideas.

The 2008 Beijing Olympics was a peak for international exposure. Foreign companies were setting up here, tourists were flooding in, the internet was more free, local media outlets started doing decent journalism and China’s global reputation was constantly improving.

While some have referred to the Hu period as “wasted”, economic growth was consistently in double digits and Beijing cared about its reputation elsewhere.

Xi Jinping has taken the country in a very different direction, with him at the “core” and unable to be challenged.

The current government has encouraged an explosion in nationalist sentiment, showing little concern for what anyone else thinks about its handling of anything. Instead, the message for other leaders has been that China’s time has arrived and you will mess with this nation at your own peril.

The message for Chinese people can be seen in additions to the Party constitution, referring to achievements made through “struggle”. This has echoes of Mao Zedong’s time in office.

As General Secretary, from the outset, Mr Xi took out all opponents via an anti-corruption crackdown.

Now he has used this year’s Congress to clear out any last remnants of those who think there should be different paths economically, socially and politically.

If he realised what was going on, one of the last things Mr Hu saw at this Congress was the make-up of the new 205-person Central Committee. It does not include Li Keqiang or Wang Yang, both seen as economic liberals, both linked to the ideas of the former administration.

This points to a new Politburo Standing Committee, stacked with Xi loyalists, guaranteeing the continuity of a trajectory which is very different to the reform and opening up in the era of Hu Jintao.